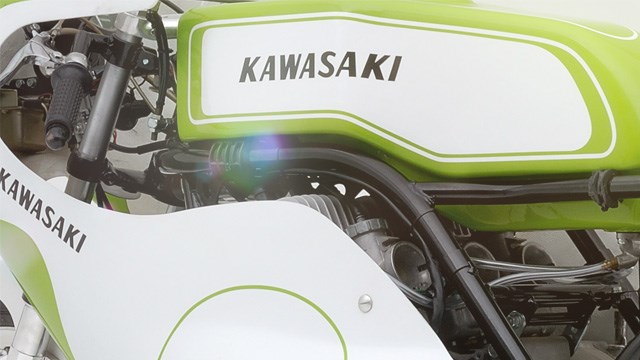 Hard work and a dream. That's what established American Kawasaki Motorcycle Corp. way back in March of 1966. The first headquarters, an old meat warehouse in Chicago, was a humble beginning for the factory team sent to open the U.S. market.

They started with practically nothing - no customers, no distributors and no image. But they had something more important - a strong desire to succeed and a promise from the factory to supply the best products.

The fledgling entrepreneurs negotiated with several private companies around the United States to distribute the first bikes, which were small two strokes sold under the brand name of Omega. But U.S. riders wanted more excitement, so the factory quickly responded with a pair of potent rotary valve twins called the Samurai and Avenger. Here was the first indication that Kawasaki would become a company specializing in high-performance fun.

These bikes were sold under the Kawasaki name -- and there was a second operation, Eastern Kawasaki Motorcycle Corp., to handle east coast distribution. In 1968, this firm and the original Chicago company merged to form Kawasaki Motors Corp., U.S.A. (KMC) in Southern California.

In 1969, the incredible Mach III 500cc two-stroke triple launched Kawasaki's performance image around the world. By the time of the legendary four cylinder 900cc Z1 in 1973, Kawasaki was a major power in the motorcycle industry, and KMC was building its own unified distribution network to offer dealers and customers better service.

Diversification came early when Kawasaki pioneered the personal watercraft business in 1973. Today our JET SKI® watercraft brand is a leader in an exploding market. The 1980's saw further expansion into ATVs and Side x Side vehicles.

Kawasaki was the first foreign vehicle manufacturer to open a manufacturing plant in the U.S.A.. Several far-sighted Kawasaki executives germinated the idea way back in 1974, and it was simple. If you're selling in America, why not build there too -- save time, save shipping and employ local labor. It worked, and years later firms like Nissan, Toyota, VW and Honda followed Kawasaki's lead.

Since personnel are the most important part of any business, KMM strives to make working conditions safe and comfortable. Kawasaki employees, working as a team, insure that the same quality standards are incorporated through all processes. Each worker takes personal responsibility for quality and feels pride in a job well done.

The plant operates on a "just in time" supply method which eliminates expensive warehousing and over-ordering of parts. Production methods combine the best of Japanese and American techniques, resulting in the unique Kawasaki Production System, of which we're quite proud. For instance, certain parts and pieces are made on special presses located right on the assembly line. This means no shortages or excess inventory on these items for more efficiency and less cost. In many cases, it also means the worker makes the part he assembles, and thus enjoys a full sense of accomplishment.