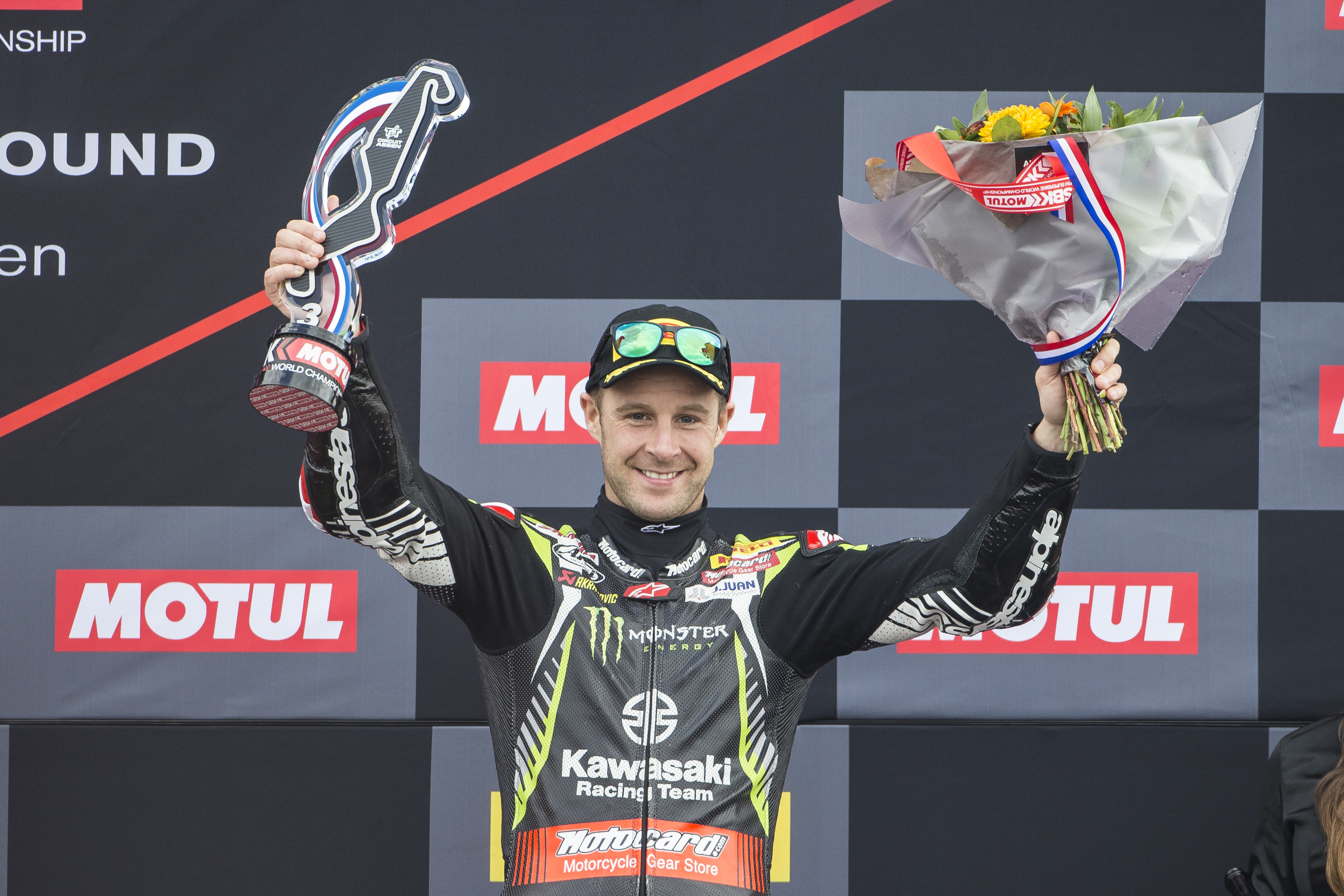 After the postponement of the first planned race from Saturday to Sunday, both of Assen's 21-lap races took place today, with Kawasaki Racing Team rider Jonathan Rea scoring first a second and then a third place finish. His team-mate Leon Haslam rode to fifth in race one and then a more difficult eighth in race two.

Under sunny skies, but in bitterly cold conditions, the first race took place at 11am, with Rea starting from eighth on the grid and Haslam fifth. Rea would work his way into third place after two laps, then second place from lap eight to the end. Haslam fought hard with Alex Lowes to finish fifth in the opening race.

In the second race Rea hit the front very early and led for the first five laps, as a battling bunch of seven riders began to form. With Haslam fourth in the first few laps he looked set for another good result, but a fading front tire saw him drop back to finish eighth.

Today Kawasaki overtook Honda as the second most successful manufacturer in WorldSBK history in terms of podium finishes, with a new total of 393.

After Assen Rea is still a clear second in the championship points table, having finished second ten times in 11 races, and third in the remaining one today. He sits 53 points from Alvaro Bautista's lead with his total of 183, while Leon's Assen results keep him fifth overall, with 93 points.

The next round of the championship will take place at the parkland circuit of Imola, in Italy, between the 10th and the 12th of May.

Jonathan Rea, stated: "I felt good in the fight and my team gave me a good bike to fight with and keep the gap quite stable for a while. I enjoyed today and it was like good old Superbike, two long races in one day. I feel like the only difference today was that I had a shorter time to take lunch and prepare for race two. But it was not anything extraordinary. I really feel like we maximized our potential with the bike this weekend. I felt good with the bike and we were stronger in some sectors and weaker in others compared to Alvaro. Even in the cold conditions I felt like the grip level was really, really good but at the end when the tires were dropping, I lost a lot of grip. The bike became more physical to ride. Apart from that I was very impressed with the potential of the tires and I was able to run quite consistently in the start to middle of the second race. I am pretty content."

Leon Haslam, stated: "In both races, with about eight laps to go in race one, the front tire grip just went and it was even worse in race two, with about 11 or 12 to go. I was happy to keep the bike upright and not lose the front. I feel we easily had the pace for podiums but we didn't, so we have to reassess the problems."

In a competitive day for the Independent Riders Toprak Razgatlioglu (Turkish Puccetti Racing) and Jordi Torres (Team Pedercini Racing Kawasaki) each scored the same total of championship points in Assen – 14 – but the best single performance came from Jordi, who was eighth in race one, with Toprak only 0.049 seconds behind in ninth, despite the painful effects of a heavy fall on Saturday.

In race two Razgatlioglu edged out Torres for ninth place by just over half a second. With Leandro Mercado (Orelac Racing VerdNatura Kawasaki) injured at Motorland Aragon last weekend the team's replacement rider for Assen, Hector Barbera, was 16th after having to pit in race one. He placed 16th again in race two, ahead of one other rider.