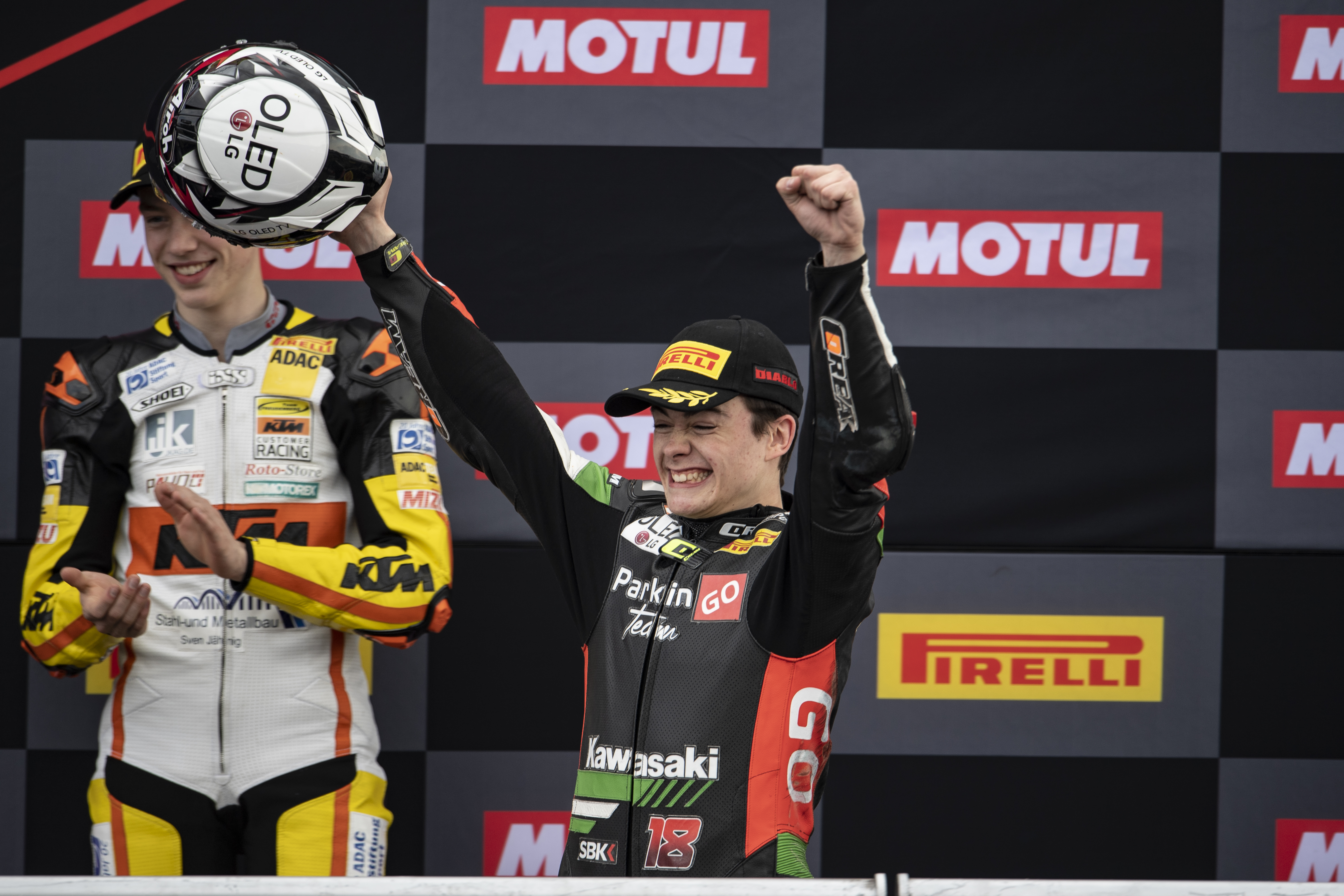 The usual mind-bendingly close and exciting WorldSSP300 championship race at Assen saw a leading bunch of 19 riders cross the line almost as one, with Spain's Manuel Gonzalez (Kawasaki ParkinGo Team) taking his second win in succession, doubling up on his recent success at home in Motorland Aragon.

After the results of the race were revised from those first flashed up on the TV screens, Gonzales was finally confirmed as the winner, from another Ninja 400 rider - local man Scott Deroue (Kawasaki Motoport).

Deroue had finished the Motorland race third, moving up by one place at his local track after an astounding contest in the highly oversubscribed WorldSSP300 grid. Scott was eighth at the end of the penultimate lap, making his push at just the right time to be in contention for the win.

Reigning World Champion Ana Carrasco (Kawasaki Provec) led the race with just a few corners to go but was swamped by other riders desperate to get on the podium. She finished eighth, but still only 0.780 seconds from the winner Gonzalez.

It was a good day for Kawasaki riders in general again, with young Ukrainian rider Nick Kalinin (Nutec – RT Motorsports by SKM) the third Ninja rider in the top four. Bruno Ieraci (Kawasaki GP Project) was seventh, one place and 0.192 seconds ahead of Carrasco.

Local rider Robert Schotman (Motoport Kawasaki) was 12th today, but as an indication of how close and competitive this class is in 2019, Robert was only 1.180 seconds back from the winner. The top 19 riders were covered by just 2.305 seconds at the checkered flag.

Once again 50 riders tried to make sure they could qualify for the race today, but after snow, sleet and a wet tack surface cancelled the 'Last Chance' race on Saturday afternoon, all of the 34 riders who started the race today came direct from the 'A' and 'B' groups in qualifying and Superpole.

In the championship standings, after round two, Gonzalez leads with a perfect 50 points, Deroue is second with 36, and Hugo De Cancellis is third with 31. Schotman is 10th and Carrasco 11th.

The third of nine rounds this season will be at Imola, In Italy, with race day on Sunday the 12th of May.

Manuel Gonzalez, stated: "Again victory, but it was so difficult. Last week it was in the last corner and here again in the last corner. We did really good work in all the practice and qualifying sessions. The bike was very good but it was difficult for me to overtake in the corners. In the straights I could manage to pass and in the last sector I wanted to be first! So thanks to the team for all the work they have done."

Scott Deroue, stated: "It is always special to be at home and take a podium in front of your friends, family and sponsors. Last year we were strong in Imola as well but in the last lap we crashed. In the other races we were strong so I think the rest of the season we can do the same, and that is my goal. Aragon and Assen are really slipstream races but in Imola and Donington, for example, it is more about pace and corners. There are not so many straights. So I am really looking forward to the other races to see how fast we are there."

Ana Carrasco, stated: "We are all very close this year but the race was very similar to last year, only we have been a bit unlucky in the last lap. I felt strong and I thought passing the leader in the slipstream would be enough to allow me to enter the last corner first, but in this class you never know! So finally we finished eighth but I felt very happy with my performance and I also felt very strong. I think I was the strongest in the group so that is really good; it gives me some confidence for the next one. The result is not what I wanted but we did a good job, so we will wait for Imola."