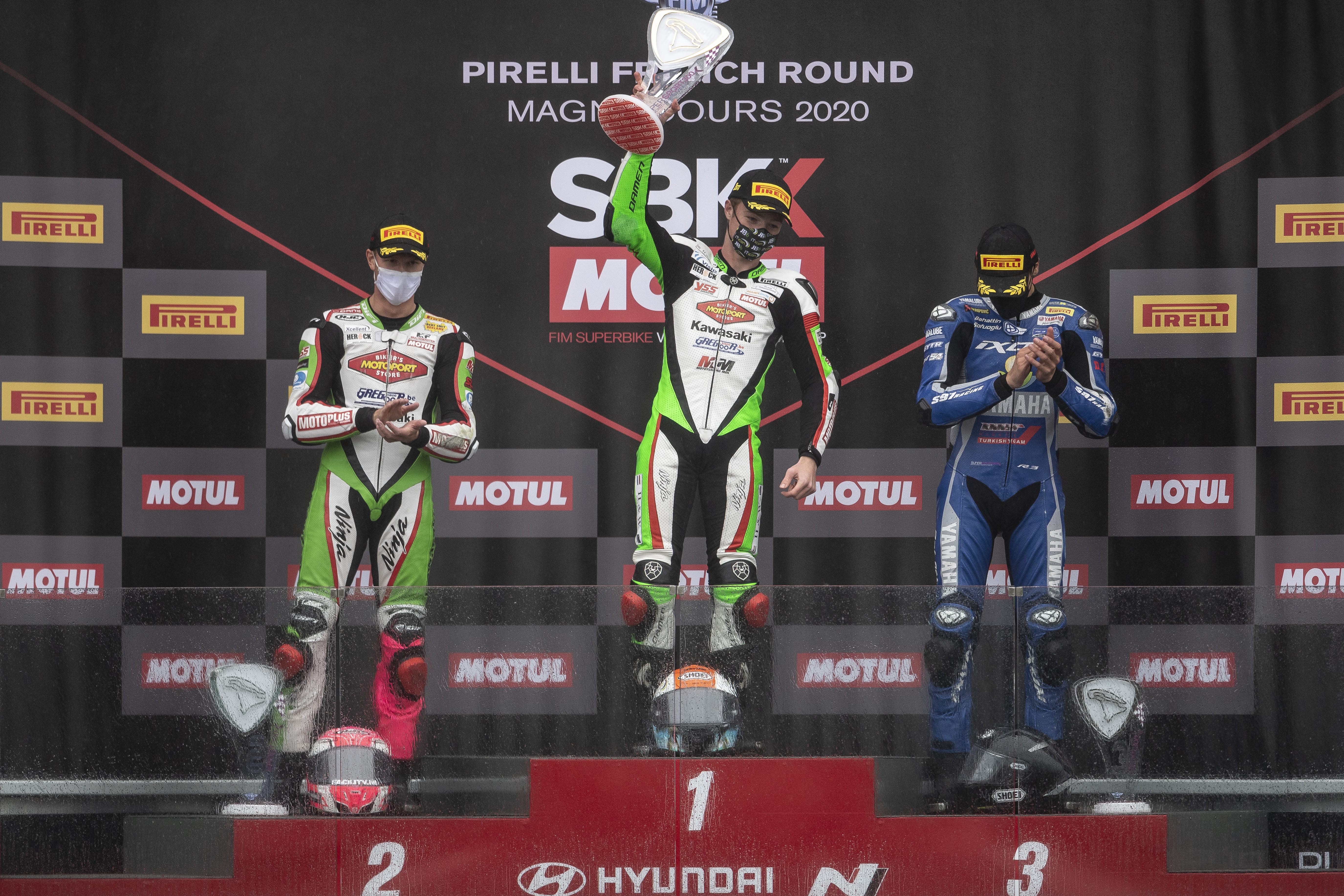 The penultimate round of the WorldSSP300 championship at the 4.411km long Magny Cours circuit in France was held in almost exclusively wet conditions, but nothing could put a dampener on the charge of the best Kawasaki Ninja 400 riders once again.

Race one soon became a private duel between championship leader Buis and his team-mate Scott Deroue, who is still second in the title fight overall. In fully wet conditions they pulled away from their competition and battled it out until the final lap. A move from fourth fastest qualifier Buis at Turn 13 saw him lead across the finish line for his fourth race victory of the season.

The Dutch riders were over eight seconds ahead of the third placed competitor, with Kevin Sabatucci (GP Project Kawasaki) in fourth place on another Ninja 400.

The second Magny Cours race, started in damp but far less wet conditions than Saturday's race one, suddenly the rains returned but once again Kawasaki riders were to the fore despite the sudden change in track conditions.

Even before the races in France had started Kawasaki had seen Tom Booth-Amos (RT Motorsports by SKM–Kawasaki) take an impressive Superpole qualifying win, very late in the session, to start from the ideal spot. Tom was to run out of good fortune on each race day and no score in race one after a crash, then finish 26th in race two.

In the championship standings, Buis extended his lead over Deroue with 203 points to 175, a significant difference of 28. Kawasaki will provide this year's champion rider again – this is now a certainty - as only one of these two riders can take the title in two week's time in Portugal. Buis could even wrap it up after race one if results go his way.

Estoril in Portugal, and an all-new WorldSSP300 circuit for the riders to get their teeth into, will host the final race weekend of the 2020 season, between 16 and 18 October.

Jeffrey Buis (MTM Kawasaki Motoport), stated: "I'm very happy with the results of this weekend. We have been working on the rhythm on the wet track since FP1 and the feeling got better and better. After qualifying we were already in good position. The victory in the first race was great! In the second race a bigger group stayed together. I managed my position well and with this second place we scored very important points for the championship."

Marc Garcia (2R Racing Kawasaki), stated: "It was incredible to win again in this championship and the race was very difficult. I saw people changing tires on the grid and then it really started raining. I told myself to push to win the race and we did it. Am really happy to have achieved this."

Scott Deroue (MTM Kawasaki Motoport), stated: "From the first practice session the feeling was good on a wet track. From P8 on the grid it wasn't easy to get to the front in the first race. I had a good pace and was able to ride to Jeffrey. Second place was a good result. I felt strong in the second race; it was only a pity because of the mistake in the penultimate lap. As a result, the podium places were gone and I had to make sure I finished fourth."

Yuta Okaya (MTM Kawasaki MOTOPORT), stated: "My feeling on a wet track was much better here than in Catalunya last time. We have made a lot of progress in these conditions. I wasn't completely satisfied after Superpole, because I had the feeling that we had more to come. But the first race went very well and I was happy with my sixth place. In the second race I managed to improve my feeling more and more. At the end of the race I managed to go to the leading group and take fifth. I'm very satisfied with the races on a wet track."

Koen Meuffels (MTM Kawasaki Motoport): "We started the first day well, but my Superpole wasn't great, with a sixteenth lap time. I was satisfied with eighth place in the first race. Magny Cours is normally not my circuit and this was the first time I scored points here. In the second race it went even better. I managed to get to the leading group and finish in seventh place. I'm very satisfied with these results. On to Estoril for the last round of the season!"