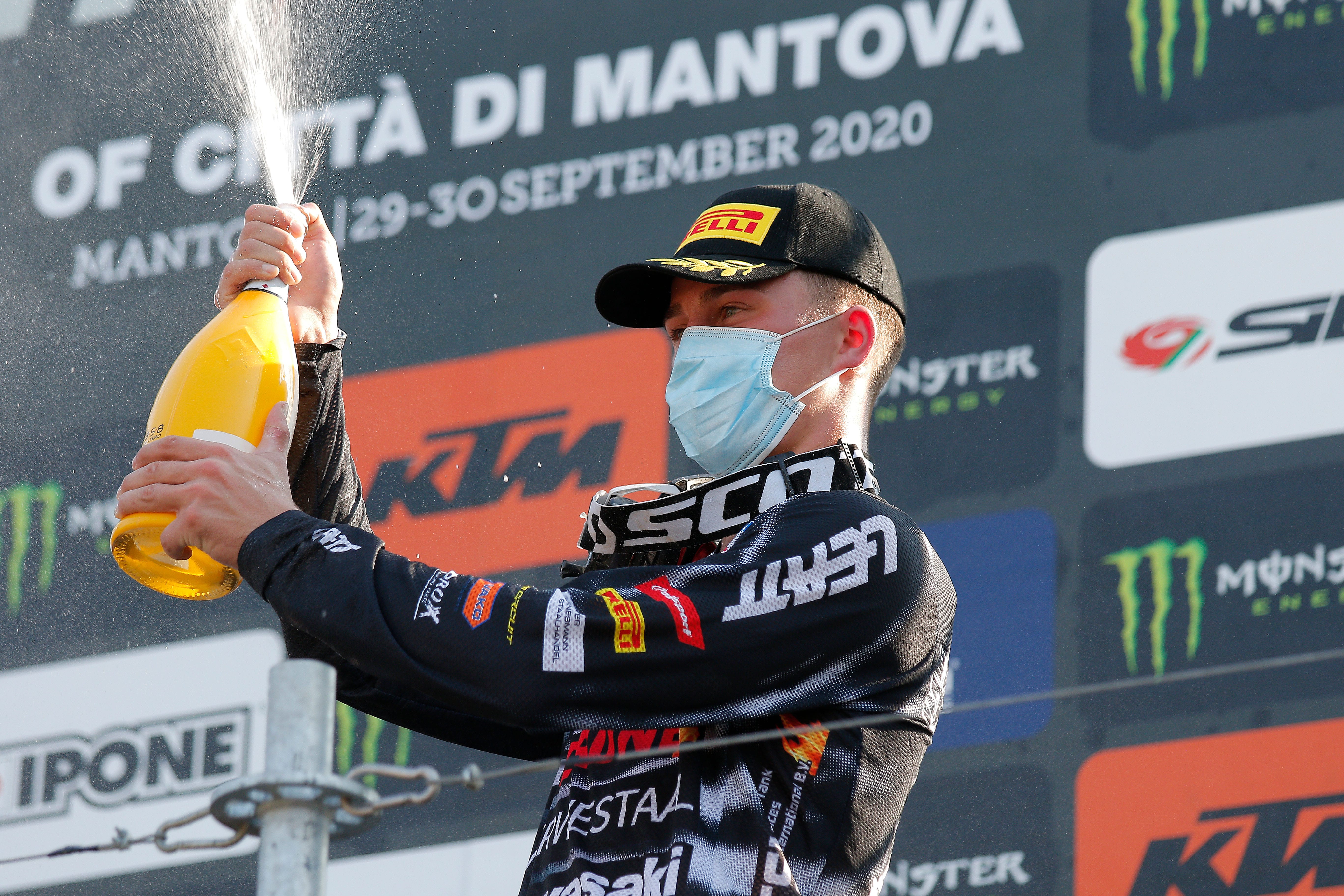 Roan van de Moosdijk put the F&H Kawasaki MX2 Racing Team back on the podium with third place and the fastest lap at Mantova in Italy at the tenth round of the FIM World MX2 Motocross Championship.

The Dutch youngster claimed his fourth pole of the season – and his third in the last four GPs – during morning Qualifying but got closed down in the first turn of race one to emerge sixth. Within ten minutes he had moved forward to fourth; a slip at twenty minutes saw him lose two places but he regrouped to finish fifth. A fast getaway in race two saw him start third, moving to second on lap two and, setting the fastest lap of the day, he closed down the leader but could not quite find a way past. A difficult lap mid-moto saw him pushed down to fifth but he quickly regained his composure to push forward again to take the checkered flag third. This also earned third overall in the GP for his fourth podium of the season. He remains fifth in the championship standings.

Roan van de Moosdijk: "Qualifying went really well again with my fourth pole of the season so I had first choice of gate. On Sunday the inside gate had been muddy but today it was dry so I knew I had a safe place through turn one. I closed the gas a little bit too early in the first moto but I kept it full gas in race two, came out second and could follow Vialle. Mid-moto I lost my way a little - I'm not sure what happened – but I regrouped, found my rhythm again quickly and could push forward to claim this podium. I'm really happy for both myself and the team as it felt like a long time since my last podium in Latvia. "

Mathys Boisrame has been unable to train fully since his crash at Faenza and this inevitably hampered him to some degree throughout the day. In the first moto he could not maintain his lap times during the closing laps and was pushed back to fifteenth after showing good speed to dispute tenth place for twenty minutes. A ninth-placed start in race two augured well and, although he had to surrender two places on the second lap when the front wheel dug in on landing and he fell, he recovered quickly to regain ninth place and hold that position until a last lap mistake cost him one place. Twelfth overall on the day, the Frenchman is now ninth in the series standings.

Mathys Boisrame: "It was again a tough race physically as I couldn't train so much since Faenza, but at least I didn't struggle with my vision today so it was easier for me. The feeling was not good during the timed practice session; I rode tense but even with a fifteenth gate-pick I was able to get two good starts. The first race was really tough physically as it was not easy to find a good rhythm. But I'm happy with my riding in the second moto as I saw that I had the speed. I had a crash in this race but the feeling was better so that's encouraging heading into the third race here in Mantova on Sunday."

Mikkel Haarup made a lightening start in race one to round the first turn in second place and hold a strong top-five placing for five laps before being forced to pull out. Determined to make amends in race two he again gated well but hurt his thumb when he tangled with another rider in the first turn and had to return immediately to the paddock. He remains thirteenth in the series points standings.

Mikkel Haarup: „I got a decent start in the second race but I tangled with another guy in the first corner; his handlebar hit my hand and hurt my thumb so I had to retire. "

The eleventh round of the championship will take place on Sunday at the same Mantova venue.
Subscription Preferences
Opens in a new Window.