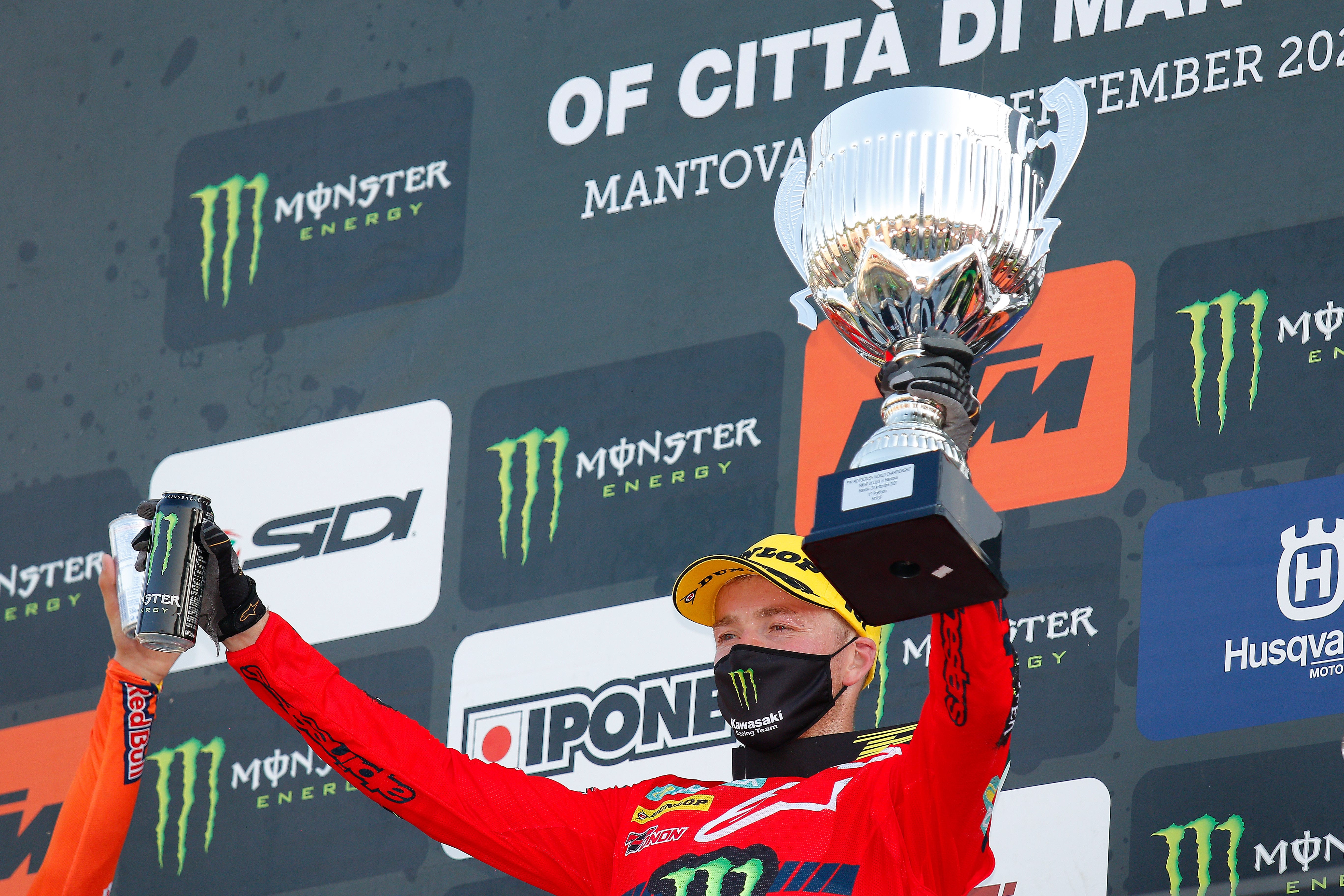 Romain Febvre and the Monster Energy Kawasaki Racing Team clinched their first victory of the season in stunning in the tenth round of the FIM World MXGP Motocross Championship at Mantova.

The Frenchman was on fire all day after heading free practice and wasted no time moving into the top three on the opening lap of race one to join in a three-rider breakaway at the head of the pack. He appeared relaxed and confident of a challenge for victory but a slight bout of arm pump mid-moto persuaded him to wisely avoid taking risks and build on this solid base in race two. And that is exactly what he did; perfect reactions at the gate and KX450-SR power saw him storm through the first turn in front and he immediately opened up a lead of nearly two seconds on the opening lap. He controlled the entire race from the front and had established an eight second advantage five laps from the end before easing back to avoid the danger of mistakes on the now heavily-rutted track during the closing stages. He took the checkered flag an ecstatic winner by one-and-a-half seconds to also clinch the overall GP victory. After consistent top six finishes in every GP since his return to racing for Kawasaki this marked Romain's first GP win in Green and the forty-five points haul has lifted him to sixth in the series standings despite missing the opening two rounds.

Romain Febvre: " It's so nice to win again; I have been waiting for this moment all season and I knew it was only a matter of time! We did a wonderful job with the team since I joined them. Until today the speed was always there but that last small factor was missing to get podiums; sometimes I crashed, sometimes there was race incidents, but finally today I had all the pieces of the puzzle. The first race went well; I was feeling good and I was ready to attack the two leaders but then I developed some arm-pump as I was riding too tense. I felt that third was my place so I didn't try anything stupid. My second start was perfect! I got the holeshot from the inside gate and that always makes life easier as you can ride your own race; I was sure that I could win on this track if I didn't make any mistakes. Tim (Gajser) tried several times to challenge me but it was not easy to pass here and in the end he made a mistake; after that I had no more pressure - though I have to admit I felt some stress when I was alone leading the race - but I knew that I had the win in my hands and we did it. A big thanks to the team who have always been behind me; they work so hard and I have so much fun riding this bike. My first victory with Kawasaki but hopefully not the last!"

Clement Desalle had a day of mixed fortunes after qualifying eighth. Despite being hampered in the turns after hurting his ankle during morning practice he advanced strongly to eighth place from a mid-pack start in race one before a mistake late in the moto cost him one position. Superb reactions at the gate saw him enter the first turn in the top five but his front wheel was hit by another machine as he corrected a slide and he crashed. Another fall after recovering to seventeenth within three laps pushed him downfield once more but he had again advanced to seventeenth at the finish. Twelfth overall in the GP Clement remains a secure tenth in the series points standings.

Clement Desalle: "I hurt my ankle a little in practice this morning; it was nothing bad but it's never cool. I had a bad start in the first moto but came back to eighth before I made a mistake and lost one position. I must admit I never had a good feeling with the track today and then in the second moto I crashed at the first corner after a good start; that ended my hopes of a good result but I was coming back well until I crashed again. "

The team remain in Mantova for the last of three GPs at the venue on Sunday.
Subscription Preferences
Opens in a new Window.