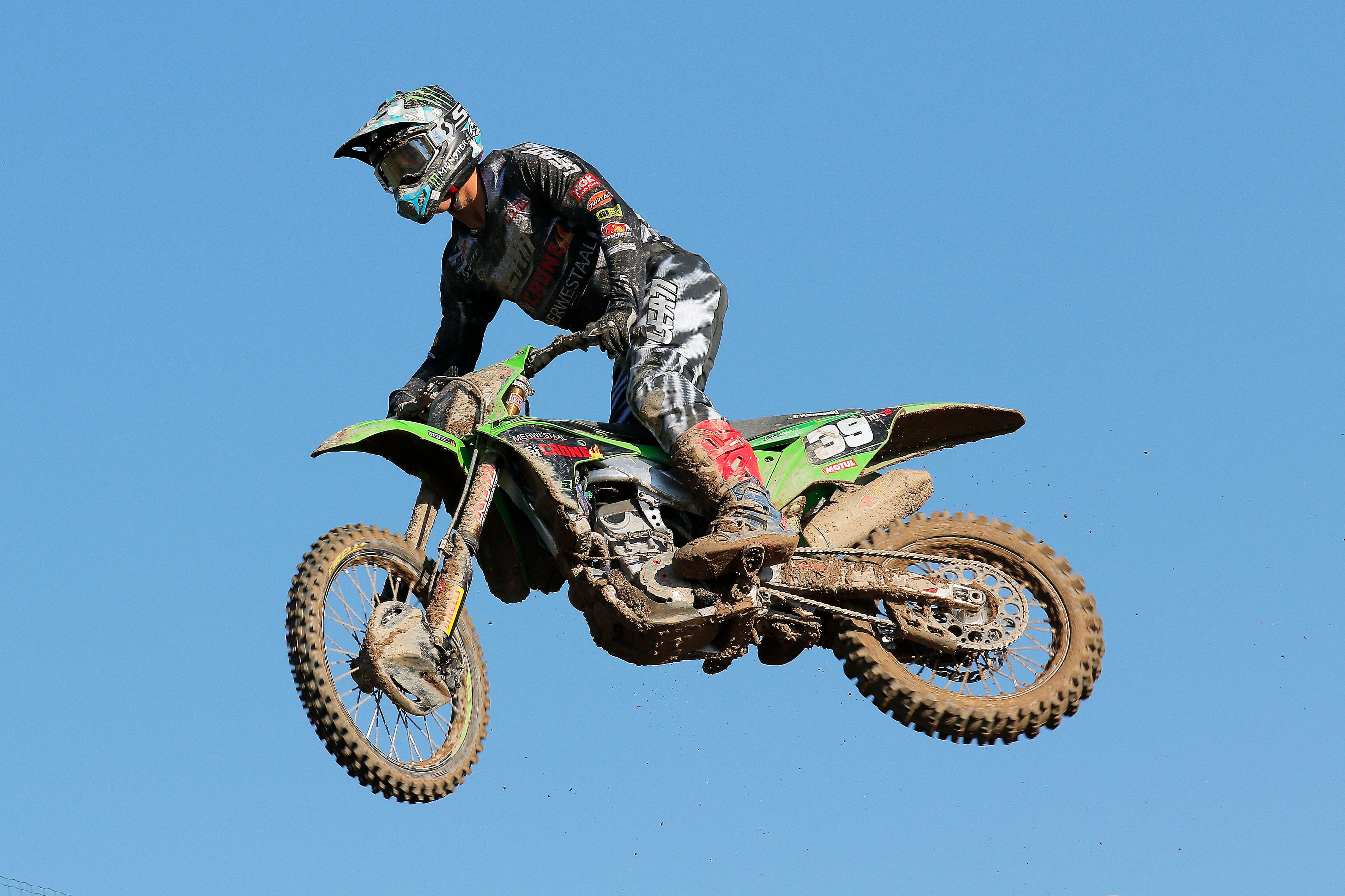 Roan van de Moosdijk scored a hard-earned fifth overall for the F&H Kawasaki MX2 Racing Team in the ninth round of the FIM World MX2 Motocross Championship at Mantova in northern Italy.

Overtaking proved exceedingly difficult all day on the rapid loose-surfaced switchback track and patience and concentration proved vital after the dramatic charge through the two opening turns in each thirty-minute-plus-two-laps race. After recording second-fastest time during morning Qualifying the Dutch youngster emerged fifth from the chaotic early tussles in race one but settled quickly, advancing to fourth within two laps and taking over third place a lap later. Maintaining his impressive lap times he moved relentlessly closer to second but the never-ending roost of damp sand off the rear wheel of the machine ahead took its toll and as the race entered the closing stages Roan's vision through dirt-smeared goggles was severely hampered; forced to slacken his pace he had to surrender third on the penultimate lap. Buried in the pack after getting squeezed out at the first turn of race two Roan pushed forward to eleventh at the completion of the first lap and advanced to sixth by the finish with a succession of creative passes to earn fifth overall on the day and consolidate his fifth place in the championship standings.

Roan van de Moosdijk: "I was consistent again but I know the results could be even better. I ended Qualifying second, close to pole after leading for a long time, and I could make good passes to third in the first race after a top-five start but the last three laps my goggles were stuck so I couldn't see; I had to slow down and Olsen could pass. My start was not so good – around fifteenth - in race two and I had to ride strongly to get to sixth as it is really difficult to pass here. You can try different lines to the rider ahead but he just closes the door on you time-and-again so you need a really special attack mode; we need two good starts on Wednesday to battle up front. "

Returning to action after sitting out the previous round to recover from a heavy crash Mathys Boisrame eased back into race pace during Qualifying as he earned twelfth choice of gate but immediately burst into action at the start of race one to claim the holeshot award. Eased out of the lead at turn two the French youngster continued to show good speed through three of the four sectors but initially surrendered places at one specific section of the track to find himself relegated to fifth after four laps. Remaining calm he then regrouped to defy any further pressure and withstood all further challenges. A bad start in race two saw Mathys down in twenty-fourth position initially; he moved forward quickly to eighteenth but was clearly feeling the effects of his recent lay-off and sensibly withdrew from the race after seven laps. He retains eighth place in the series standings.

Mathys Boisrame: "It was difficult for me physically today, as I had to rest for nearly two weeks after my crash in Faenza. I only rode the bike for thirty minutes before arriving here but I still made a decent lap in the timed practice session and got the holeshot in the first moto. Of course I was lacking the energy to stay in front so fifth was not a bad result. My second start was not good at all and then I started to make some mistakes; I was struggling with my vision so it was better to stop rather than risk a crash."

Mikkel Haarup was also returning to action after missing the previous GP and lack of race practice saw him suffer wheelspin at the start of race one; pushed wide at turn one he found himself twenty-fifth at the completion of the opening lap but settled down to post consistent lap times to advance to seventeenth at the finish. Gating top six in the second moto he surrendered just one position during the first half of the moto but then lost his rhythm for a number of laps to be pushed back to twelfth before regaining his composure in the closing stages.

Mikkel Haarup: "The bike was good off the gate but I got too much wheelspin in race one – my fault! But my riding was good and I made some good passes for seventeenth. I got a top-six start in the second moto and hung in there for a long time; during the second half I was accepting it too much when people passed me, but we're headed in the right direction. "

The team remains in Italy for two further rounds of the series at Mantova on Wednesday and Sunday next weekend.
Subscription Preferences
Opens in a new Window.