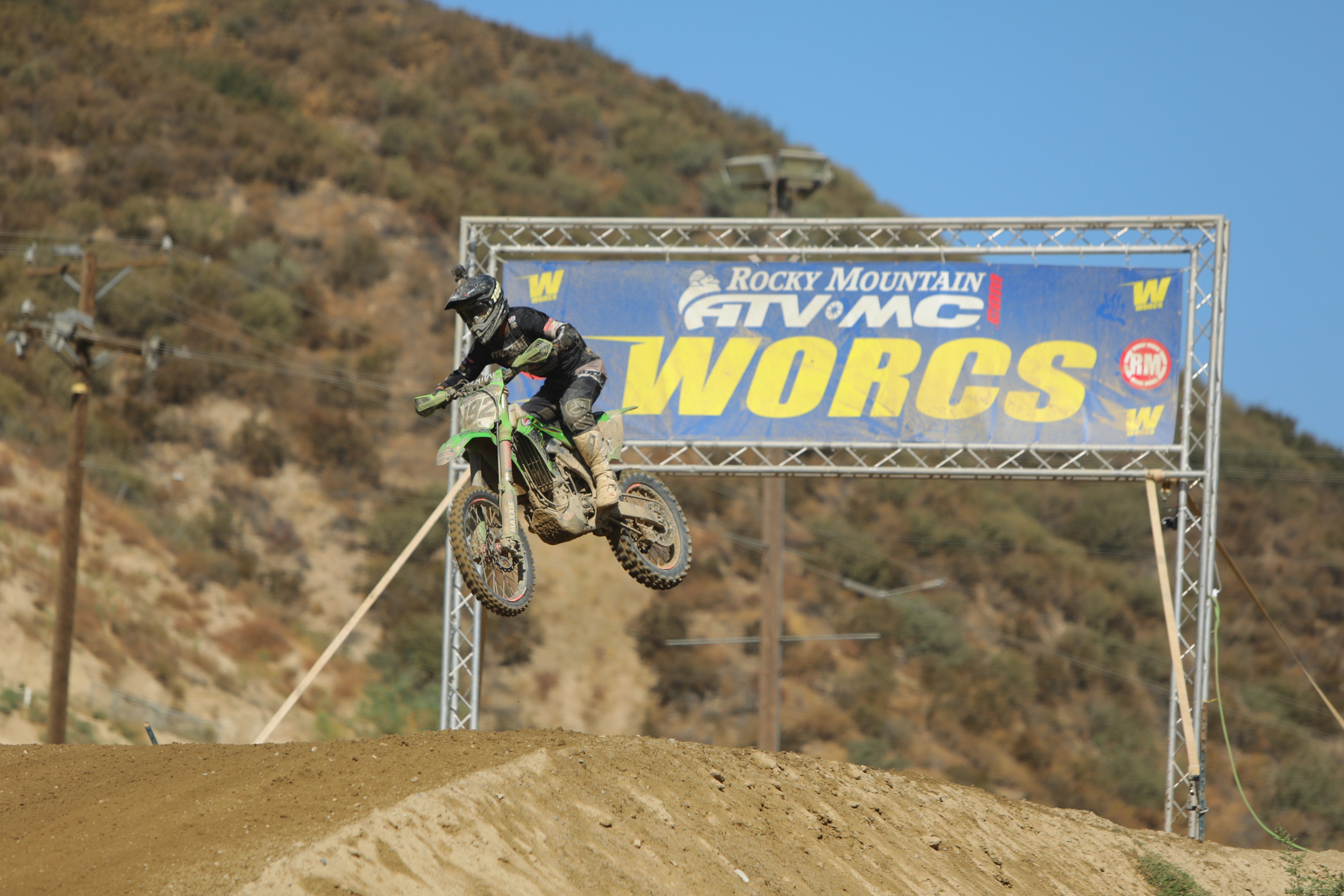 The WORCS series kicked back off with a double round at Glen Helen this weekend, which meant the Pro classes would have two separate rounds, racing both Saturday and Sunday. Because of the double round, the qualifying 450 and 250 A race would be cut to 50 minutes on Saturday and Sunday morning, respectively. Additionally, the Pro main events were modified to be a 75 minute plus one lap event instead of the traditional 2-hours. The updated schedule would allow the riders to sprint a bit harder in the Pro races, however, with so many laps being spun over the two days, it was still going to be a physical and mental battle. 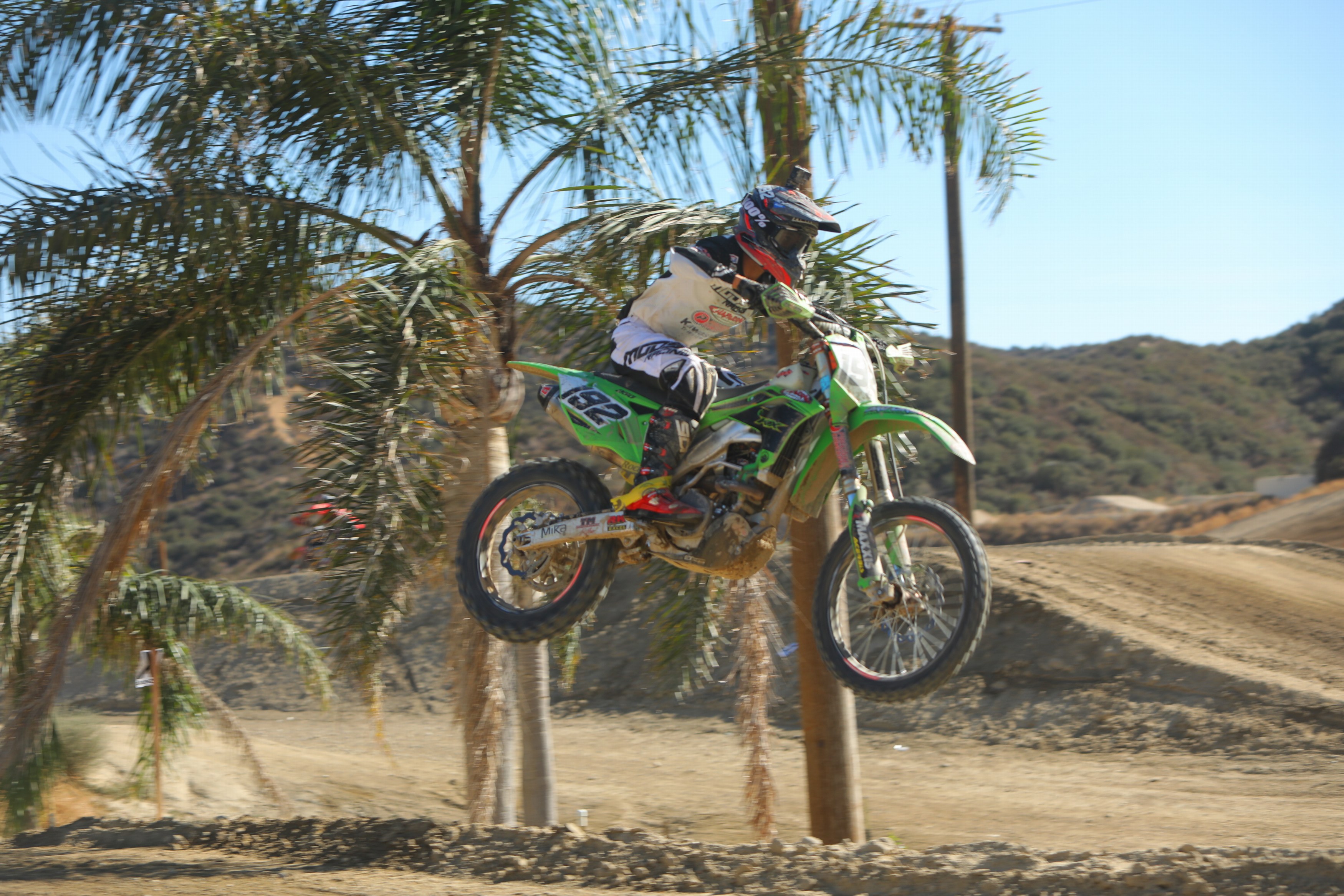 Alvarez got pinched off the line in Saturday's 250 A qualifying race and was buried back in the pack as a consequence. As a further result, he got caught up in a pile up when a rider went down in front of him. JP had nowhere to go, hitting the downed rider's bike. Then, another racer came from behind ran into JP's side, injuring his arm and ribs. Alvarez was able to remount, work his way forward into qualifying position by the end, and did his best to regroup for the Pro 2 Lights main.

In the Pro 2 Lights event, Alvarez got off to a decent start, coming around the first lap just outside the top-five. Shortly thereafter, JP started noticing an issue with his motorcycle, coming into the pit to notify the team. Thinking it was electrical, the crew gathered the parts needed to try to solve the issue. However, it seemed to semi-correct itself, which allowed Alvarez to continue circulating. After dropping outside the top-ten, the Kawasaki rider was able to move forward and salvage seventh by the finish.

The team was able to diagnose the issue after Saturday's race and get JP's KX250 running perfectly for Sunday. With full power restored, Alvarez motored to the lead through the first couple corners of the 250 A qualifier. From there, JP showed great speed and held on to take the race win.

At the start of Sunday's Pro 2 Lights main event, JP was eager to get a good start. Unfortunately, Alvarez was knocked slightly off balance over the gate, losing full drive, and getting pinched off. He did well through the first few corners to salvage a top-five position. Together with series rival Tyler Lynn, Alvarez was able to work up through the pack and the two took the top-two spots by the third lap, with Lynn in the lead. Over the next thirty minutes, the two racers traded fast lap times, with Alvarez staying within striking distance. Over the final few laps, JP continued to ride strong and crossed the line in second position.

"It was a pretty good weekend overall. Saturday didn't go very well. I got run over in qualifying, and just wasn't feeling it. Then, we had a little issue in the Pro race, so that was a bummer. Sunday, however was a totally different story. The bike was running really good and I felt really good, and I was able to get the win [in 250A]. The Pro race was a little different with the two [added] sections: the steep downhill through the Glen Helen sign and the rock pit, which was really gnarly. Luckily, I was able to make my way through it the whole race, stay consistent and come out second. I was happy [to battle with Tyler on Sunday]. Usually, he's way out front and I'm not able to race with him, so it was great to be battling with him. I wish I could have held onto him for a little bit longer, but I took a couple spills in the rock section and it just cost me. I want the win. I'm tired of taking second and third. I want to get a win and get after the championship." 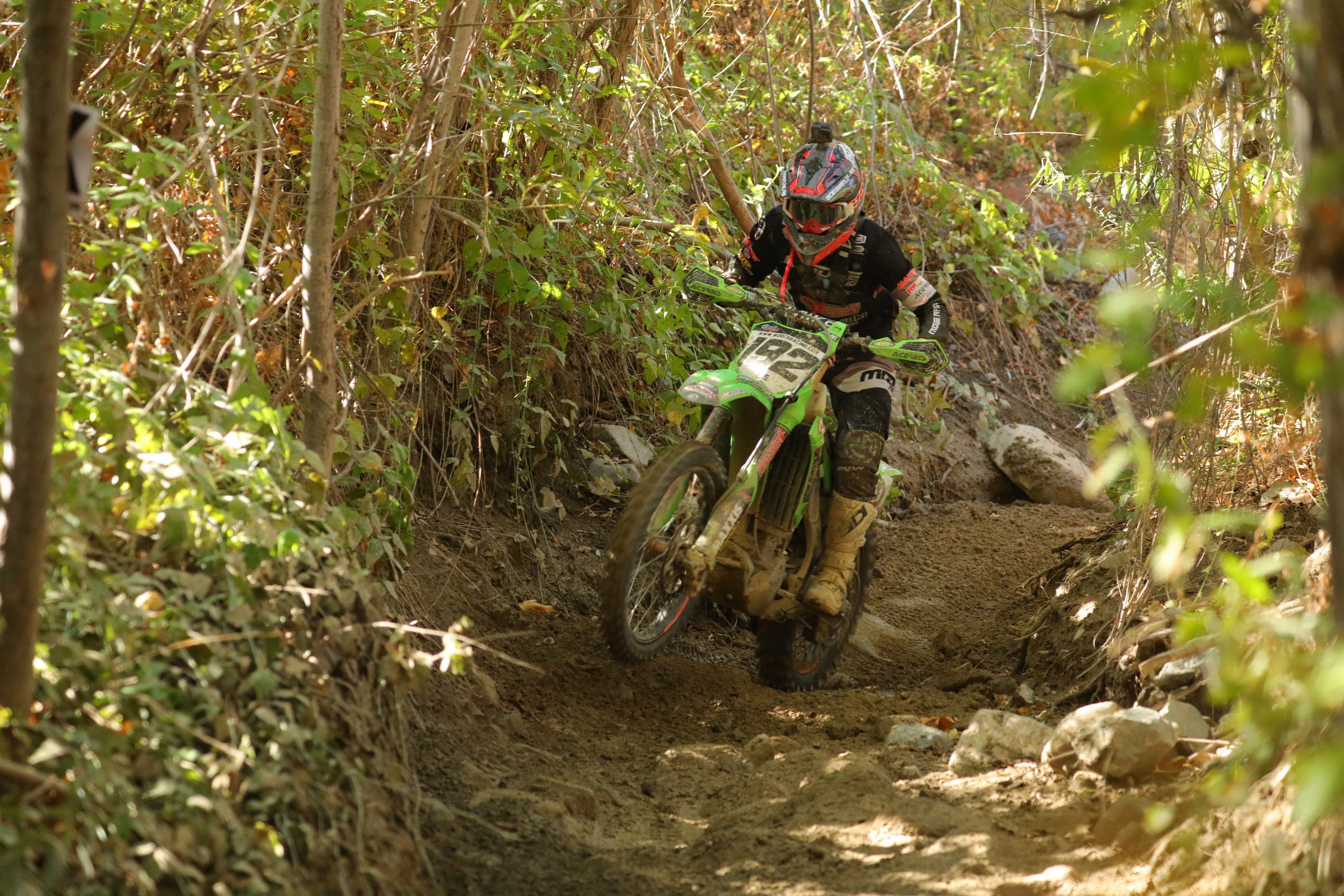 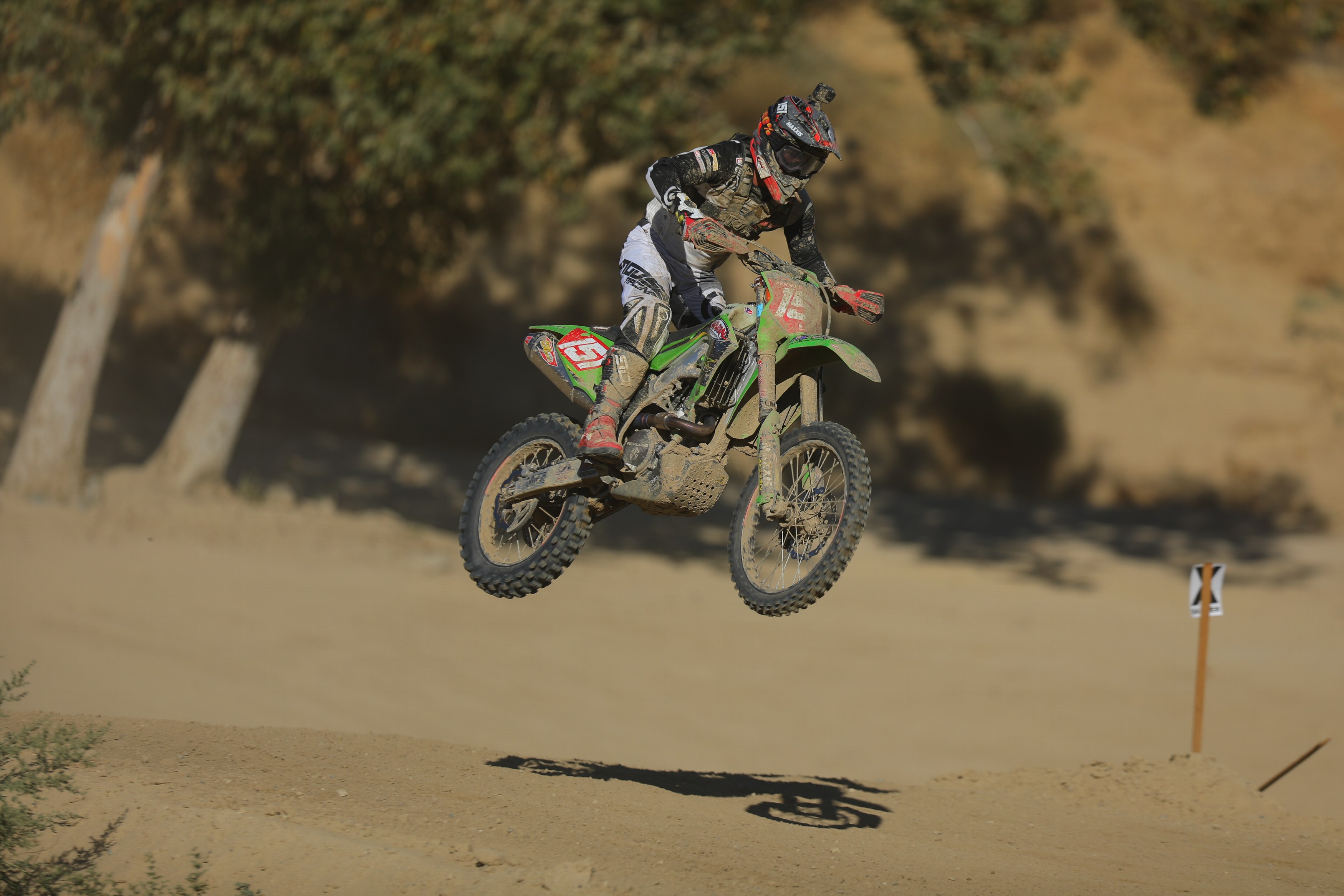 Clay built his way into his first race back on the 450. After starting outside the top-fifteen, Hengeveld worked his way up to the edge of the top-ten where he maintained a consistent pace as he studied the course in preparation for the Pro 2 main event.

At the start of the Pro 2 event, Hengeveld gated just inside the top-ten. Clay showed solid pace early in the race as he held onto the pack of rider just ahead of him. The KX450 rider is still rebuilding fitness in his body, especially his previously-injured wrist. Toward the end of the seventy-five-minute race, Hengeveld began to feel a bit of weakness creep into his wrist and hand. He did his best to maintain his pace, losing a couple spots, and crossing the line in eleventh.

Clay said his body felt a little better on day-two and it showed in his pace and results. Hengeveld ran closer to the front in the 450 A qualifier, just at the edge of the top-five. He kept his aggression deeper into the race and crossed the line eighth.

In Pro 2, Clay got off to a great start, slotting into second. He was shuffled back to the edge of the top-five through the first half-lap, then there was chaos in the added rock pit section. Numerous Pro 2 riders fell, causing a hectic pile-up. Fortunately, Clay was able to make his way through and settle into sixth position. From there, Hengeveld battled between sixth- and eighth-place, holding a strong pace to the finish and crossing the line in sixth.

"I was really happy to be out here racing; I haven't raced a WORCS race in a while. The double round was definitely tough for me. I still have a lot to improve, but overall it was pretty good being able to improve from Saturday to Sunday. Saturday, honestly, felt like a learning day to me. I struggled in the morning a little bit. Then, I struggled a little in the Pro race. All-in-all it was a pretty good day: I carried what I learned into Sunday and came away with better results. On Sunday, I think my body was just better. It was loosened up a little and I had a little clearer mind. I had a better qualifying race, too, which helped for Pro 2 and I ended up sixth. So, not bad. Heading into NGPC, I'm just focused on riding, riding, riding. I'm definitely looking forward to 29 Palms, I love that place and hope to get back to the same results I've had there the past few years!" 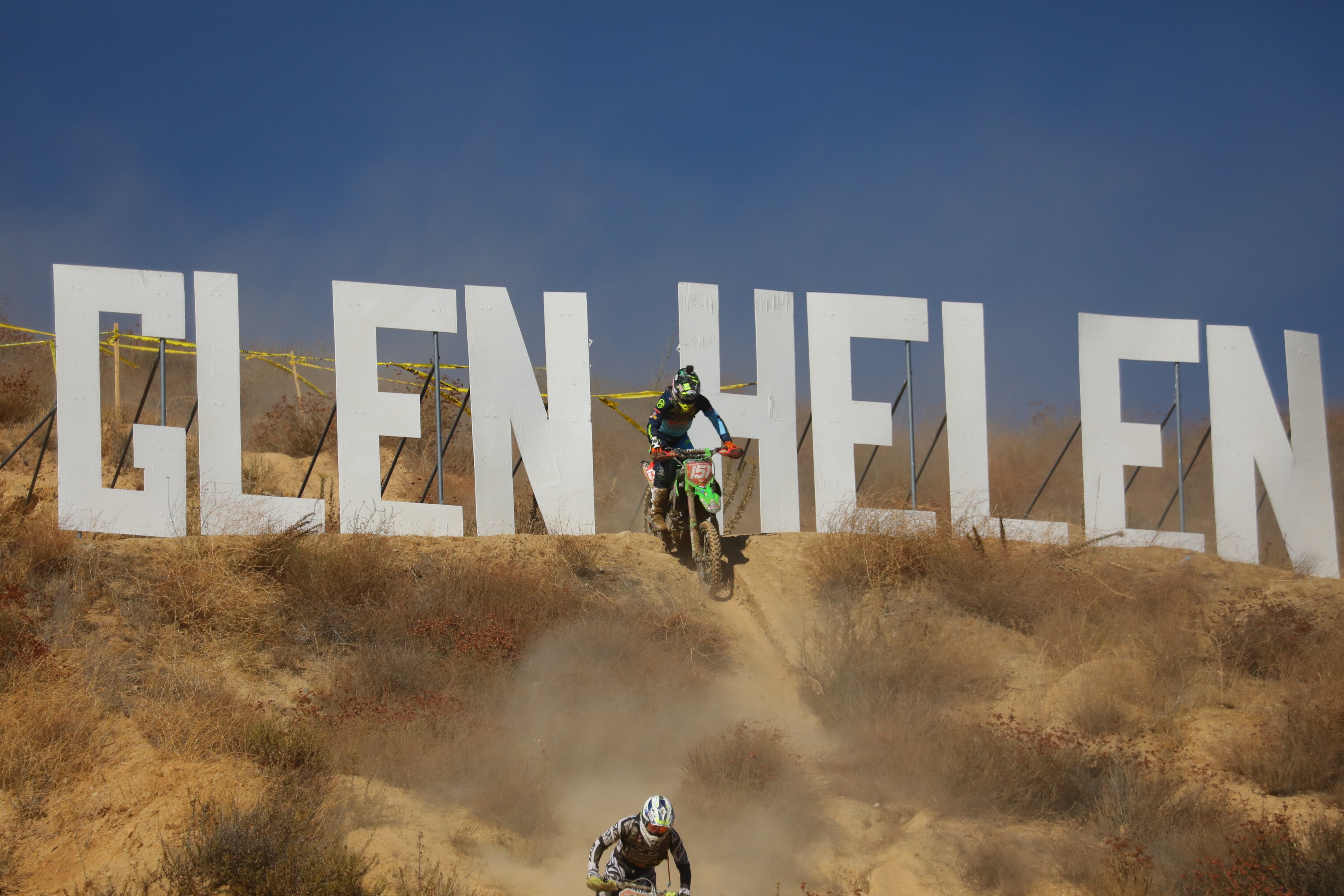