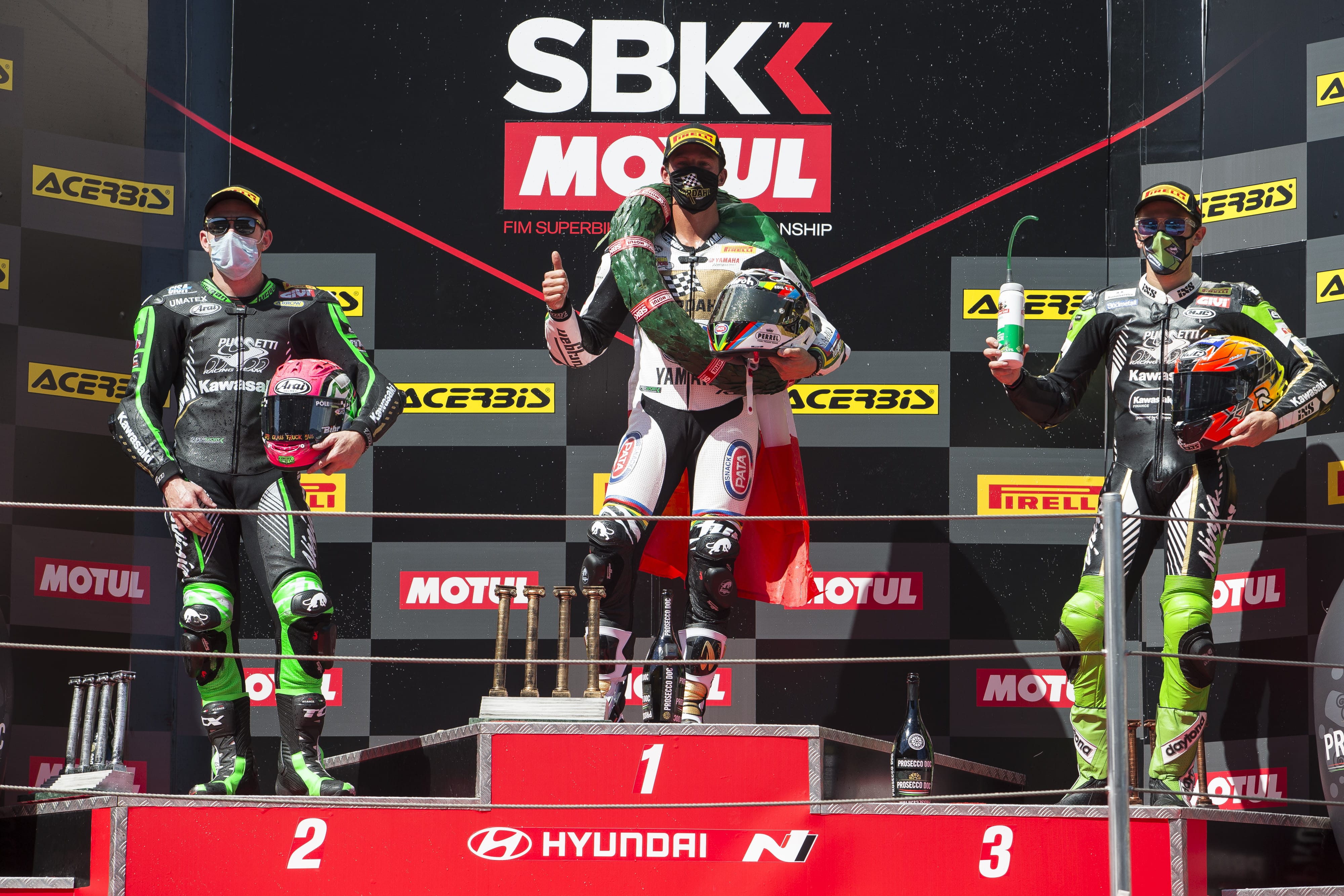 The final 17-lap WorldSSP race at Catalunya saw Kawasaki Puccetti Racing riders Lucas Mahias and Philipp Öttl finish on the podium together for the first time this season. Lucas was second and Philipp third after an often epic battle between the top runners.

An audacious early pass from Mahias saw him take the lead in what was to be a six rider leading group, with Öttl and Mahias fully involved in the fight for the podium positions all the way to the flag.

With a slim chance of still being World Champion this season Mahias forced the pace out front for a time, needing to win today to have any chance of catching Andrea Locatelli. Philipp battled with Corentin Perolari and championship leader and eventual new World Champion Locatelli, who was in an early fourth place.

The Italian rider went to the front at half race distance and even with Lucas and Philipp taking turn to chase him down Locatelli continued out front to win the race and the championship.

With Mahias second and Öttl third this was the first time they had each finished on the same podium in 2020, despite all their previous podium successes. Today proved to be the fifth podium ride of the year for Lucas and the third for Philipp.

After six championship rounds, and with two rounds and four individual races to go, Lucas is now second in the points and Philipp fourth. In the overall standings Locatelli has 263 points, Mahias 159, the injured Jules Cluzel 146 and Öttl 124.

The penultimate round of the short but intense 2020 season will take place at Magny Cours in France, October 2-4.

Lucas Mahias, stated: "The race was not too bad but again it was not possible to win. I tried to follow the lead but it was the same race as the others this season. It is not possible to ride at the rhythm of the yellow bike. For sure it is not easy, because when you start the race and think your best position is going to be second it is not so nice. But this is racing for this year. I am happy for my team and Kawasaki for my second position today and also because my team-mate finished third, so that is very nice for Puccetti Racing and Kawasaki too."

Philipp Öttl, stated: "It was a tough job. I decided to use the super-soft tire today but with ten laps still to go I felt, 'OK, there is a drop.' Then I was just sliding around but I tried to build up as much grip as possible. It was a very hard job to do this but I am happy. We also made a 2-3 with Kawasaki and I think I learned a lot this weekend. In the past two races we had not enough luck to finish on the podium but today feels really good."

Young Spanish rider Manuel Gonzalez (Kawasaki ParkinGO Team) was one of the early leading six as he grows in stature in his new class with every passing race weekend. He would finish seventh, after receiving a three second penalty for exceeding the track limits, to sit ninth in the championship fight, with 89 points overall. Can Öncü (Turkish Puccetti Racing) fell early, lifting his left hand off the handlebar as the pack entered turn one but still being hit from behind by another rider. Can is 13th overall in the championship rankings.