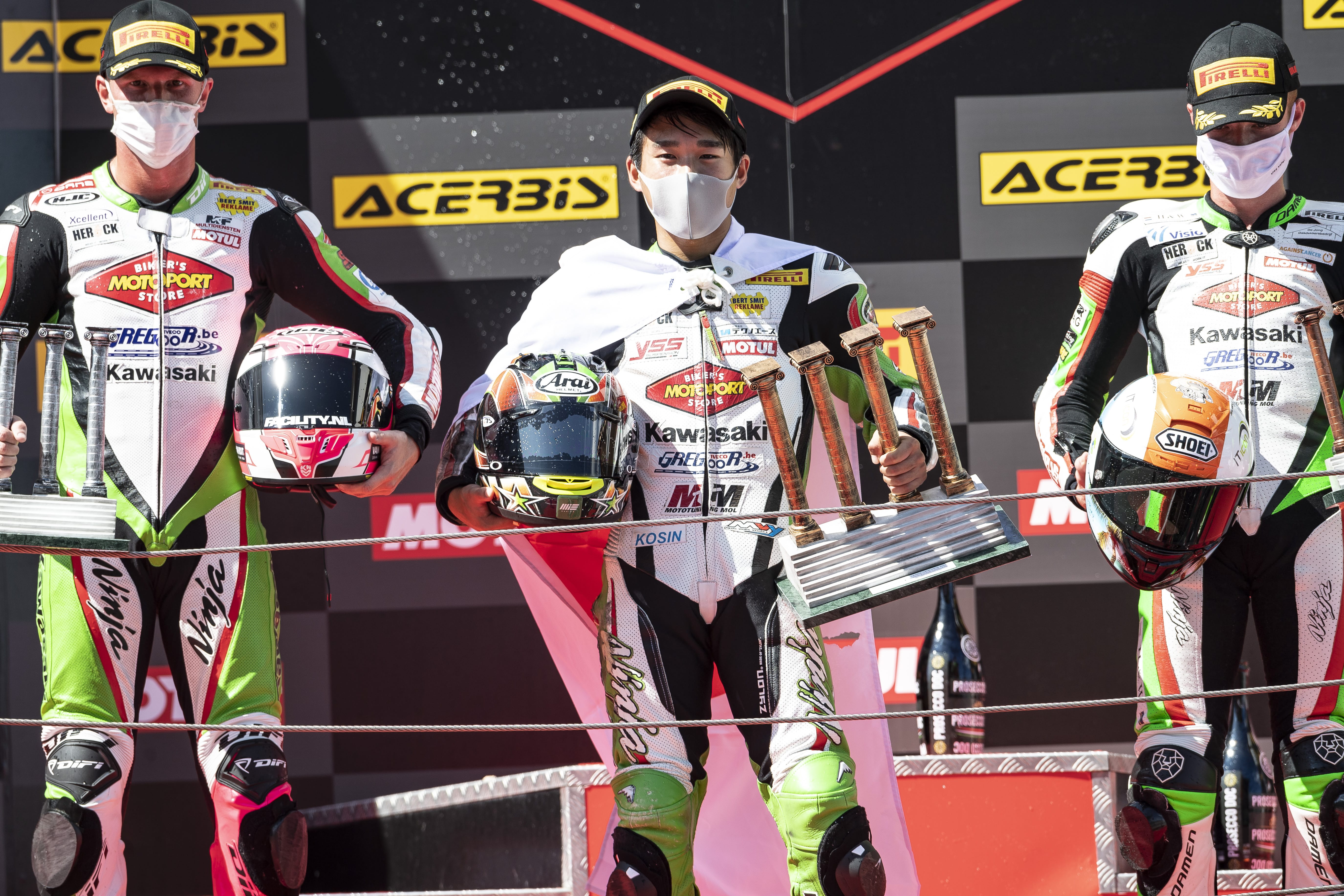 Every podium position at the fifth round of the heavily oversubscribed WorldSSP300 championship series in Barcelona was filled by a Kawasaki Ninja 400 rider, with the ten-lap races being won by Tom Booth-Amos (RT Motorsports by SKM–Kawasaki) on Saturday and Yuta Okaya (MTM Kawasaki Motoport) today.

These were not just the first race wins in this class for each of these riders, but also the first for a British and a Japanese competitor, respectively.

With Booth-Amos untouchable in the wet and then drying conditions that were present for the first ten lap race, after an early weekend of practice affected by wet and changeable conditions, second place on Saturday was taken by Samuel Di Sora (Leader Team Flembbo Kawasaki) and third by returning rider Marc Garcia (2R Racing Kawasaki). Garcia only got the call to come to Catalunya a few days before he took his remarkable podium finish.

Booth-Amos won race one by 6.336 seconds, with a trio of Di Sora, Garcia and fourth placed Mika Perez (Prodina Ircos Team Kawasaki) all grouped together. Almost ten seconds separated them from the next pack, in what were tricky conditions throughout.

In a warm and sunny Sunday race, again held over ten action-packed laps, Booth-Amos was in podium contention again until he was taken out by another rider colliding with him right at the end, leaving Okaya to win from the two leading riders in the championship standings, Scott Deroue (MTM Kawasaki Motoport) and Buis.

Deroue had been caught out by the changing track conditions on Friday and had to qualify via the Last Chance Race on Saturday afternoon. He won it to ensure he lined up on the grid for both 'real' races, although in a lowly 29th grid slot. Another potential top rider, Tom Edwards (Kawasaki ParkinGO Team), was in the lead of the Last Chance Race after his own Friday qualifying issues but a technical issue caused him to pull in and not qualify for either of the championship races.

World champion in 2018, Ana Carrasco (Kawasaki Provec), was unable to race at her home round this weekend after suffering vertebra injuries in a testing crash at Estoril in Portugal recently. After surgery to aid the healing process Ana – who thankfully escaped any neurological problems in the crash – is now working on a return to race action in 2021.

After the latest two simply epic races at the 4.627km long Catalunya circuit Kawasaki riders have secured seven of the possible ten race wins in 2020 so far, and the lion's share of the podium places.

In the championship standings, Buis is now 16 points ahead of Deroue - 158 points to 142. Carrasco is fifth with 95 and despite his sudden loss of potential points in race two Booth-Amos is sixth, on 94 points.

Thomas Brianti (Prodina Ircos Team Kawasaki) went to seventh in the championship today, while Perez is now eighth after his two points scoring rides in Catalunya; in fourth and 13th position respectively.

Okaya's full drama race two win takes him to tenth in the championship overall, on the same 54 points total as his team-mate Koen Meuffels (MTM Kawasaki Motoport) who went 8-4 in his Catalunya race finishes.

That second race top four, containing all four MTM Kawasaki Motoport riders, is not only a unique result in outright terms, but also all four team riders were covered by just 0.239 seconds at the flag.

France provides the backdrop for the next round of the championship, to be held at Magny Cours between 2 and 4 October.

Tom Booth-Amos (RT Motorsports by SKM–Kawasaki), stated: "I didn't know I was the first British winner in WorldSSP300, to be honest, so it is nice to achieve that. We have had a little bit of bad luck in the past couple of rounds, some my fault for crashing in Portugal, and that put us one step back because I hurt myself quite a lot there. My team have worked a lot to come up with a new package this weekend and for the rest of the year. I am really happy and very grateful for what they have done for me. The championship is still open so we will keep pushing."

Yuta Okaya (MTM Kawasaki MOTOPORT), stated: "It's an indescribable feeling to win the race! I had a hard time in Aragon and after a good Superpole here in Catalunya I missed the right feeling on the drying track. It was a difficult second race because the track temperatures were much higher than in the other sessions. In the last corner I was able to pass Scott. Japan's first win in the WorldSSP300; I want to thank everyone who is involved in this!"

Jeffrey Buis (MTM Kawasaki Motoport), stated: "I'm very happy with the results this weekend. The Catalunya circuit was new for me. I was a little bit disappointed after Superpole, because I rode my fastest lap just after the flag. In the first race I got the maximum out of it on a drying track. The second race was a nice fight. I had a bit of luck in the last lap, but sometimes you need that. Very happy with the podium and the points for the championship."

Scott Deroue (MTM Kawasaki Motoport), stated: "We had such a difficult start to the weekend and it's a great feeling to end with a P2. We had to get forward from far back on the grid, after I had no luck with the weather conditions in the free practice sessions. Because of that I had to compete in the Last Chance Race. In the first race yesterday I was disappointed, because I didn't have the speed on the drying track. In the second race I was able to come forward well and we achieved a great team result. I want to thank them for the great bike they gave me!"

Samuel Di Sora (Leader Team Flembbo Kawasaki), stated: "It was a very complicated opening race because of the rain and we made the right choice with the set-up. The bike was feeling great and the team did an incredible job. Tom started very quickly so he had such a gap that we could not re-join him. We were also strong in the dry conditions and we had a solution to the problems we had at Motorland and Jerez, in past races. The team brought me the bike I needed to go fast so I am very, very happy."

Marc Garcia (2R Racing Kawasaki), stated: "This is absolutely amazing. After ten months of not having any bike I got a call last week to say to prepare to get ready to race this weekend. It is amazing to get on the podium in my first race this year."

Koen Meuffels (MTM Kawasaki Motoport): "I enjoyed the races this weekend and that was important after all the bad luck we had in previous races. Riding on a drying track is always a challenge, but I was satisfied with my eighth place on Saturday. The second race was a great team success, although I would have liked to be on the podium myself. I was just 0.078 seconds short of third place, but we can be very satisfied with this weekend!"