Another Moto Podium For Romain Febvre 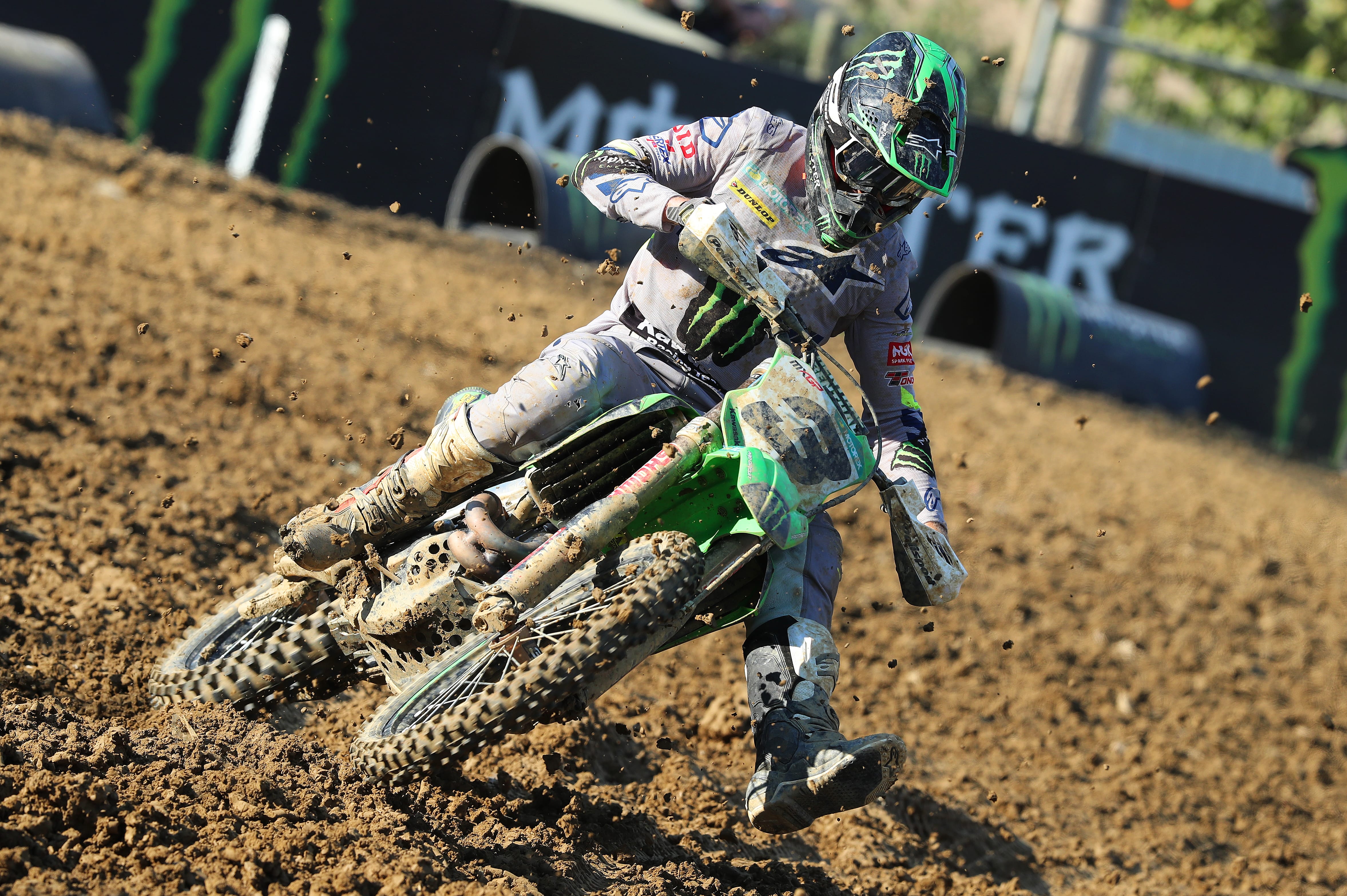 Romain Febvre of the Monster Energy Kawasaki Racing Team posted his fifth moto podium of the season in the eighth round of the FIM World MXGP Motocross Championship at Faenza in northern Italy.

With a series of fastest laps Febvre was the man of the race as he sliced his way immaculately from an initial ninth to third in a thrilling second moto around the hillside track to quickly disperse memories of an unfortunate opening moto tenth. Having already advanced to seventh from an initial eleventh in that moto the Frenchman suffered a setback on the second lap when he ran off-track on the slick sun-baked surface to avoid a hole and crashed through a trackside advertising hoarding. Losing twenty positions before he could rejoin the race he displayed tremendous determination to surge back into the top ten by the end of lap twelve before a further setback as he lost traction in a rut; the incident cost him three places but he regained both spots before the finish. Two hours later followed an even more impressive ride as he cleverly outwitted rivals to scythe his way up the leader board; entering the final lap he even had the leaders in his sights but time ran out to launch the ultimate challenge for victory. The effort brought fifth overall on the day despite the disappointment of race one and he has now jumped to eighth in the series points standings; only the series leader has scored marginally more points than the Frenchman during the six GPs he has contested since missing the first two GPs through injury.

Romain Febvre: "It could have been a very good GP but on the second lap of the first race I was surprised to see a big hole in a rut; I tried to avoid it but I went outside the track and crashed. I was nearly last when I got back on the track; I came back to tenth but crashed in a corner as I was still pushing to regain positions. I restarted thirteenth to come back again to finish tenth despite two crashes. It was too much to retain any hope of a podium, but nevertheless I gave everything to come back after a mid-pack start in the second moto; I finished third, close to Cairoli. My speed was again good in both races but we struggle a little with the starts as the chase to turn one is uphill with a different grip between the gate and the first corner! We have some testing planned in our program next week to prepared for Mantova."

KRT colleague Clement Desalle continued his gritty return to speed from recent injury with strong rides to ninth and seventh for eighth overall. Once more displaying outrageous speed through the opening laps of race one the Belgian converted a fourteenth-placed start into seventh before settling into a rhythm he would be able to maintain to the completion of the tough thirty-five minute race to take the chequered flag ninth. Race two was even more impressive as he again maintained his lap times to the end to advance two positions mid-moto from his initial ninth to seventh. He is now tenth in the series points standings.

Clément Desalle: "It was much better than the previous rounds; I had less pain in my back, although it's difficult during the last ten minutes because the pain returns. I'm pretty happy with the day apart from the starts. I had a better feeling than at the previous races, and in the second moto today I was able to make passes and gain two positions in the second half of the race. It was not an easy campaign in Faenza, but I'm pretty satisfied and now we have two weeks to prepare for the next rounds."

After three tough races in the space of eight days the teams now take a weekend off before facing an identical three-race schedule, also in Italy at the Mantova sand track, between September 16-23.
Subscription Preferences
Opens in a new Window.