Buis Doubles Up For Championship Lead 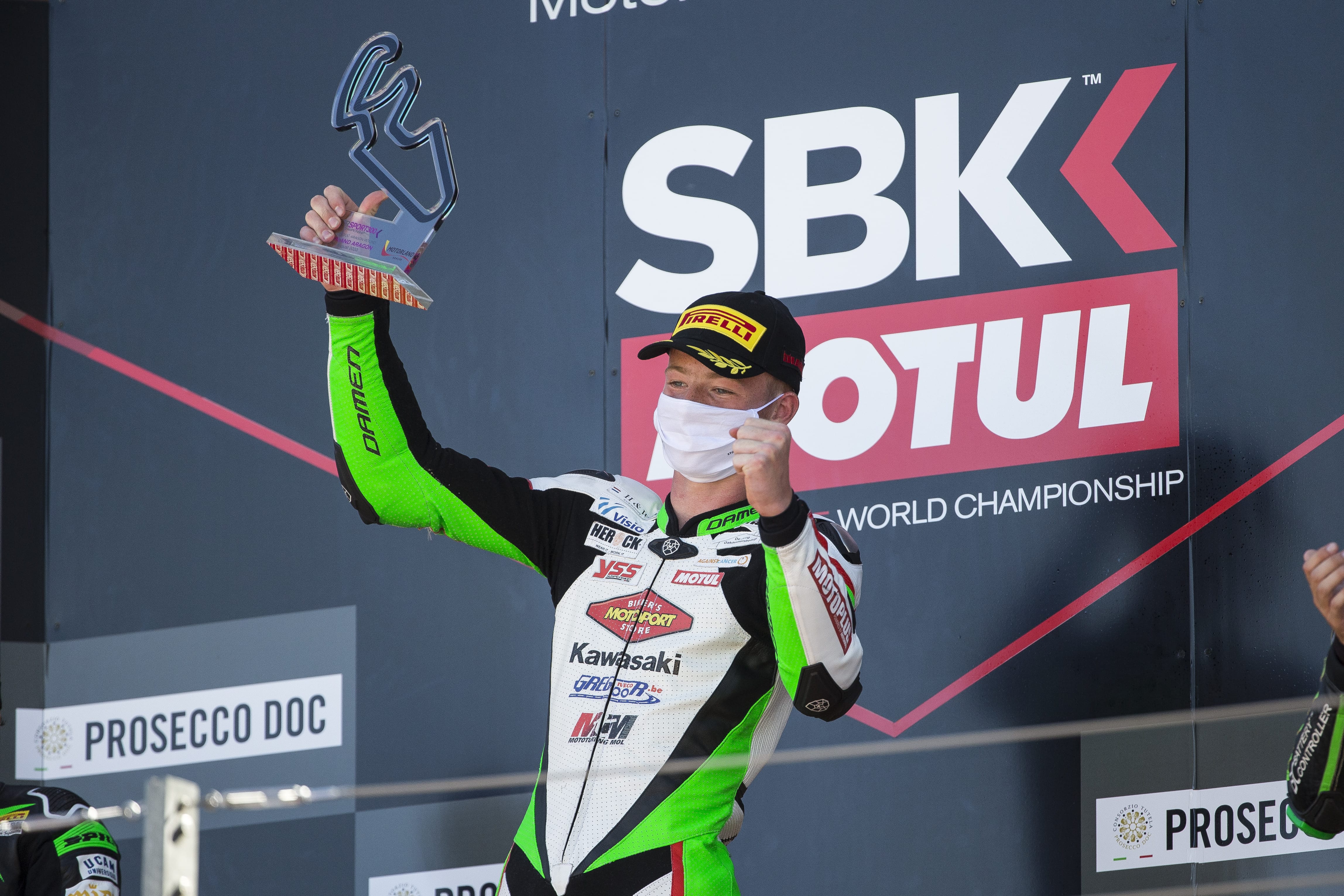 Teenager Jeffrey Buis (MTM Kawasaki Motoport) scored not only his first but his second WorldSSP300 race wins in a superb double victory display at Motorland Aragon on his Ninja 400 Kawasaki.

Just to add to Buis's joy he had already taken pole position after Superpole qualifying and started both ten-lap races from the premium grid spot. Dutchman Jeffrey is the first rider so far to score two wins in 2020 and he is now the championship leader for the first time ever.

Ana Carrasco (Kawasaki Provec) is second overall in the close and highly competitive championship standings at the halfway point of the season, finishing her Motorland races second on Saturday and sixth today.

Scott Deroue (MTM Kawasaki Motoport) was unlucky to fall on Saturday after contact with another rider - and no score as a result - but he recovered with confidence today to score third place. It was his 16th career podium – extending the all-time record for top three finishes.

Rookie rider this year Tom Booth-Amos (RT Motorsports by SKM–Kawasaki) placed fifth in race one but no scored in race two, leaving him fifth overall after some great early season rides at the previous rounds.

Bruno Ieraci (Kawasaki GP project) was seventh and Victor Rodrigues Nunez (2R Kawasaki) was eighth in race one. Brianti completed the top ten in the opening race on Saturday 29 August.

In race two Ieraci was seventh, but just 1.3 seconds from the lead. Koen Meuffels (MTM Kawasaki Motoport) was ninth and Rodrigues Nunez tenth.

Yuta Okaya (MTM Kawasaki Motoport) could not replicate his previous round podium level performance and no scored in each race. Tom Edwards (Kawasaki ParkinGO Team) also had two DNFs at this round, while his team-mate Filippo Rovelli was 20th in race one and then 14th and inside the points in race two.

In the championship standings, which closed right up at this round in particular, Buis now leads with 86 points, Carrasco is second with 84 and Deroue has 83. Booth-Amos is fifth on 63 and Brianti sixth with 58.

The Motorland Aragon circuit is – again - the next stop for the WorldSSP300 runners at the Teruel Round, to be held next weekend, between 4 and 6 September.

Jeffrey Buis (MTM Kawasaki Motoport), stated: "What a weekend! We were fast in all the practice sessions and I managed to get my first pole position in the first race I pushed from the first lap and was able to get away. It was very special to win my first race. In the second race I pushed even harder, but this time I couldn't get away. It was so cool to score my second victory from the weekend in the last corner. We are now first in the championship. The bike was great thanks to MTM Kawasaki Motoport."

Ana Carrasco (Kawasaki Provec), stated: "I am feeling very happy because race one was a really difficult one after a difficult weekend. I struggled a little bit and because of Superpole we had to start on the fourth row. That made it a difficult challenge. I wanted to arrive in the top group very soon but it was windy and the other riders were fighting very hard. But, finally, to finish in the podium is so really good for us and the team."

Scott Deroue (MTM Kawasaki Motoport), stated: "I'm happy with my podium in the second race, it was a good one. I rode behind Jeffrey (Buis). He had a good pace and I thought we could get away together, but that wasn't possible. In the last lap I was in the lead and unfortunately on the straight two riders passed me. I'm disappointed with my crash in the first race; we lost a lot of important points there. But the championship is still long. Next week we will go for it again!"

Mika Perez (Prodina Ircos Team Kawasaki), stated: "After a year and half with no podium and some issues I am very happy to be back in this position – it feels like a small victory. It was a very difficult race, the group was very big and we were fighting in all the laps but the bike and the team did an incredible job. We are starting to make points. We need to take more podiums and win races because we deserve to be there. This podium was a thank you to the team and our supporters."

Thomas Brianti (Prodina Ircos Team Kawasaki), stated: "For it was a very difficult race today because Scott and Jeffrey had a gap after three laps and I got up to Scott but it was a very, very difficult task. I put in 100%, and that was as much as I could do today."