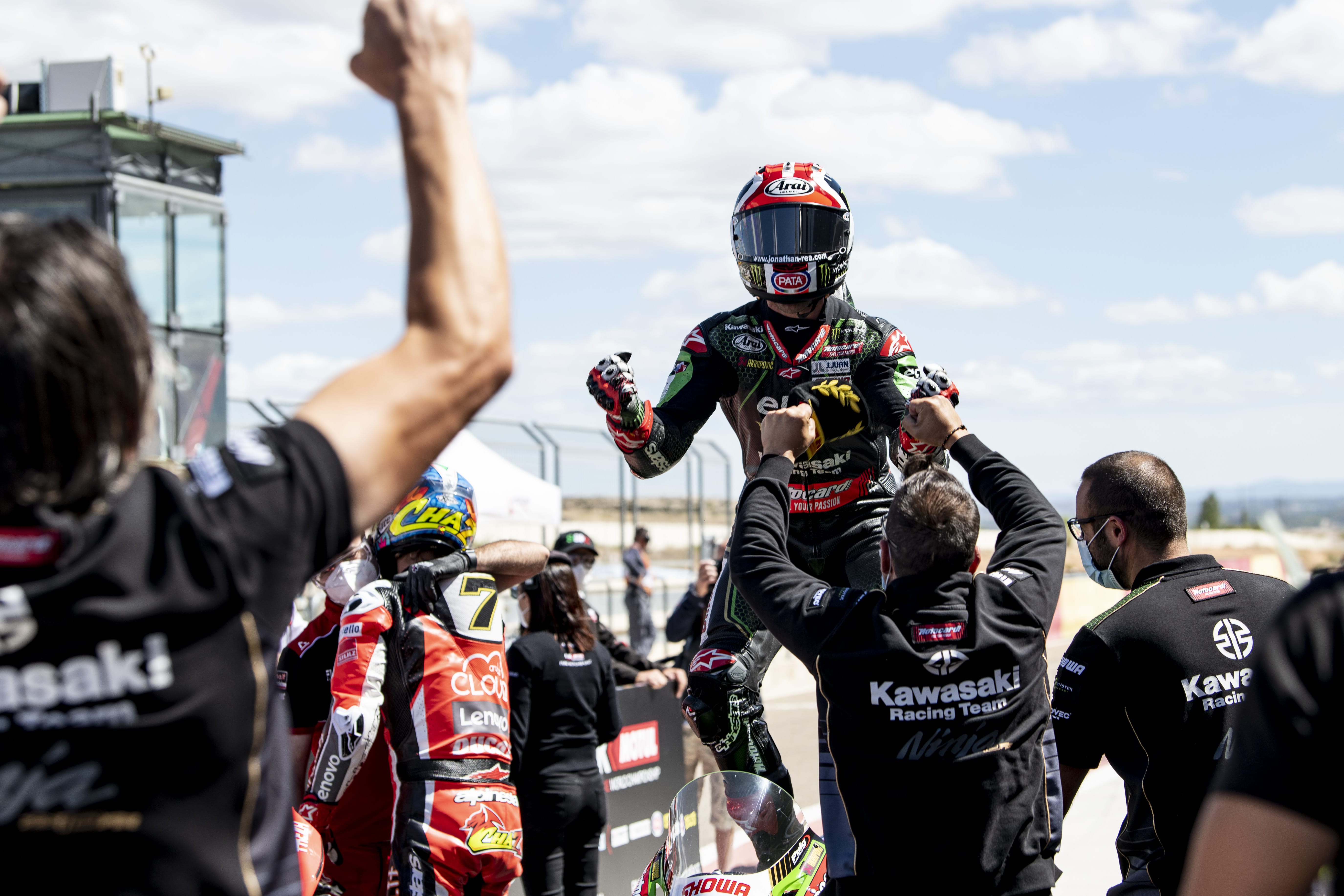 Jonathan Rea (KRT) lifted both WorldSBK winners' trophies at Motorland Aragon today to retake the championship lead and continue along his strong seam of form. Alex Lowes (KRT) recovered from a painful crash on day one to record a sixth and then a ninth place today.

After finishing third in the opening WorldSBK race on Saturday Rea exceeded even his own expectations to win not just the 10-lap Superpole race but the full 18-lap race two. Jonathan has now won seven of the 12 races this season on his Ninja ZX-10RR.

Rea continued his impeccable winning form in the 2020 season's 10-lap Tissot-Superpole races earning him not only more valuable maximum championship points but a repetition of the pole position start he enjoyed in both race one and the sprint. Lowes was a battling sixth in an entertaining sprint race for the off-podium finishing positions.

The second full distance race of the weekend, officially called race two, was a front-running display of sheer determination and pace from Rea. With his main championship rival Scott Redding finishing fourth Rea had to fight off the challenge of multiple-Aragon race winner Chaz Davies after running wide and allowing his rival to close up.

Rea continued to keep up his relentless pace to ease away and took a margin of victory of 1.280 seconds. This was his 80th WorldSBK race win since he joined Kawasaki in 2015 and the 95th of his entire career. He crossed the line in demonstrative after one of the most impressive race wins of his long and hugely successful WorldSBK career.

The second race was a tougher one for Lowes, taking part in his second race of the day after his big Saturday fall. He showed his usual grit and determination in a multi-rider fight, moving up from 12th on lap one to ninth on the final lap despite not feeling 100% confident in his front end set-up.

After the latest compelling and unpredictable WorldSBK round, which marks the halfway point of the 'new normal' season, Rea has 189 points, Redding 179, Razgatlioglu 124, Davies 120, Michael van der Mark 110 and Lowes 102.

The Teruel Round is next up for the WorldSBK riders but it will be held at the same Motorland Aragon circuit, between 4 and 6 September.

Jonathan Rea, stated: "In the Superpole race I made an OK start but then Loris Baz came on the inside, so I got a little bit flustered. I knew I had to keep the rhythm really fast in the beginning because it was a good opportunity. Using the softer SCX tire for the sprint race has a lot of potential but we did not do so many laps on it in practice, and the conditions were not as hot. So, thanks to my team because Pere and all the guys gave me a really good set-up. In race two I went wide at one point and that gave Chaz the chance to attack in turn one but I wanted to attack him back straight away and set my own rhythm. I knew I could push and put my head down again. I did not expect the pace I had today in race two; I was so surprised. I knew I could be fast and the Superpole race gave me a lot of confidence. When I could really get stuck into the 1'50 laps, and keep that load going at the beginning of the race, it was easier to manage when the tyre would drop. I learned from race one yesterday."

Alex Lowes, stated: "I was quite happy for the Superpole race and was fourth for most of it, but just lacked a bit of speed at the end, when Alvaro Bautista and Chaz passed me. They were a bit quicker and I could not fight them off after the crash yesterday. We made a change with the front of the bike for the long race today and I did not feel comfortable. I was sort of fighting the bike. I was involved in quite a big battle, which was fun, but not in the positions that I want to be battling for. It was hard because I was not as confident in the front and it was sliding a lot so I could not be too aggressive. We put some points on the board and we have a few days now to get some good result in Aragon again next weekend. Well done to Johnny and the guys today, bouncing back from yesterday's race. He did a fantastic job, so we know the Ninja ZX-10RR can do it, so we need to put our heads together before the next weekend to give myself a little bit more confidence with a better set-up."

Xavi Fores (Kawasaki Puccetti Racing) was 12th and 11th today, to sit 13th overall. Maximilian Scheib (Orelac Racing VerdNatura Kawasaki) was 14th and then 15th, scoring points each time to finish up 19th overall at the end of the weekend. Roman Ramos (Outdo Kawasaki TPR) could not build on his points score from Saturday, finishing the Superpole race 19th and then retiring from race two. He is 22nd after competing in only two rounds of the four run so far.