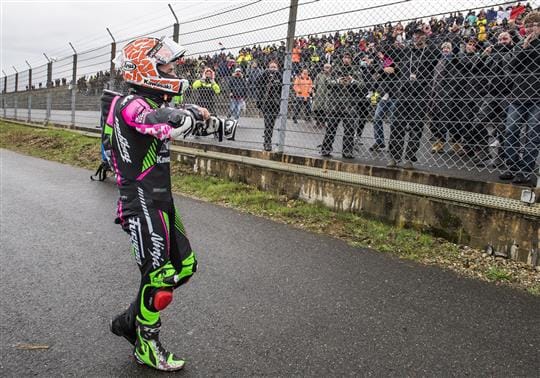 Lucas Mahias will compete for Kawasaki Puccetti Racing in the WorldSBK Championship in 2021.

The Frenchman has been the Italian team's Supersport rider of choice for two years, continually proving his significant talent and great determination; qualities that have encouraged Manuel Puccetti along with Kawasaki Motors Europe to promote him to the premier class and entrust him with the Kawasaki Ninja ZX-10RR.

Born on 14 April 1989 in Mont de Marsan, France, throughout his career Mahias has shown to be an eclectic rider, more than able to adapt to different bikes. His first appearance on the world stage came in 2013, in Moto2. The following year he competed in several Moto2 races, made his debut in both World Supersport and World Endurance, and was crowned French Supersport champion.

In 2015 he continued to race in the same categories, while the following year saw him make his debut in World Superbike appearance with Team Pedercini's Kawasaki at the Assen round. He also won a World Endurance race and scored two wins, three podiums and a pole position in the Superstock 1000 FIM Cup. In 2017 he played a starring role in World Supersport and was crowned World Champion. In 2019 he joined Kawasaki Puccetti Racing and has scored three wins, 13 podiums and one pole position with the squad to date.

Steve Guttridge – Kawasaki Europe Race Manager: "After our previous champion retired the team and KME had some pretty big decision on how to continue WorldSSP at this top level. In signing Lucas I can say we made a good decision. He has always given 100% effort for the team and to manage the Ninja ZX-6R so well each season at the sharp end of the racing. We felt it was now his time to move up to the premier WorldSBK category inside our top satellite team and demonstrate what he can do there together with a great crew inside Puccetti racing team and a championship winning bike in the Ninja ZX-10RR."

Manuel Puccetti – Team Principal: "I'm pleased to announce that we have decided to promote Lucas Mahias from Supersport to Superbike next year. Supporting our riders from the Stock or Supersport classes right up to the top class is part of our team's DNA and is something we have previously done with riders like Franco Morbidelli, Michael Ruben Rinaldi, Randy Krummenacher and Toprak Razgatlioglu. I'm convinced that Mahias is a real talent, a solid rider who is always highly motivated. Racing in Superbike has always been his dream and so I'm sure he'll put in maximum effort to achieve the best results. On our side, we'll do all we can to help him adapt to the new bike and the new category, without applying any pressure. As soon as we have a 2021 calendar, we'll schedule some tests so that we're prepared for the new season."

Lucas Mahias: "I'm excited to be able to compete in WorldSBK. That was always my goal, and to move up with the Kawasaki and Puccetti Racing is absolutely fantastic. I've competed in two Superbike races in the past and have ridden a 1000 in Superstock and in World Endurance, but I know that the ZX-10RR is a very powerful and competitive bike, and I can't wait to get on it. I had two aims in my sporting career, the first was to become WorldSSP champion and the second is to win the Superbike World Championship. Having achieved the first, I'll now do everything I can to obtain the second too. I know it's a very tough championship, but I'll have a great team and a competitive bike on my side. I want to thank Manuel Puccetti and Kawasaki for this amazing opportunity."